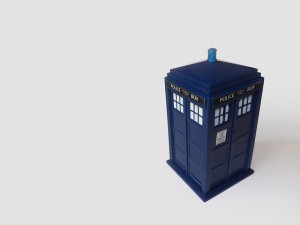 1. The Sonic Screwdriver is Doctor Who’s Wand. His most popular spell is Alohomora, which can open and close any lock/door. It is also used for things like Episkey to treat minor injuries and Specialis Revelio to reveal hidden secrets. As a matter of principle, Doctor Who tries not to use it for bad spells just like Albus Dumbledore.

2. The TARDIS is a combination of multiple wizarding technology.

a) It can apparate and disapparate. While Hogwarts wizards do so in time, the TARDIS can do the same in both space and time thanks to its integration with the Time Turner. Portkey magic is also channelled. Sometimes his opponents attempt the Anti-Disapparition Jinx.

b) The Extension Charm made the TARDIS bigger on the inside than the outside, like Hermione’s Tent in Harry Potter 7. (Even Doctor Who’s pockets use this charm much like Hermione’s handbag)

c) The TARDIS is made strong and impenetrable by a combination of magic like a strong Duro spell, the Imperturbable Charm, Protego (a shield charm), the Unbreakable Charm and Salvio Hexia (protection against hexes).
Another TARDIS protection is Repello Muggletum (the Muggle-Repelling Charm). This keeps humans away from it by causing them to remember something else important and to forget what they were doing in the first place. That’s why very few humans try to break into the TARDIS even by mistake.

In fact the Doctor was trying to make an acronym for all of the above charms. He failed and partially used T (Time-Turner) A (Apparate) R (Repello Muggletum) D (Duro) I (Imperturbable Charm) and S (Salvio Hexia) and then made TARDIS mean Time And Relative Dimension In Space, a scientific rather than a magical concept. 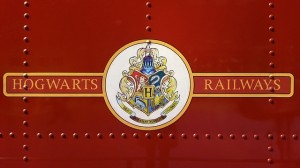 3. Doctor Who is currently in possession of the Philosopher’s Stone, something that allows him to live seemingly forever.

4. Doctor Who also dabbles in the Dark Arts. Like Lord Voldemort he keeps Horcruxes hidden all over the universe. So whenever he dies he uses a Horcrux to regenerate. He is a Metamorphmagi (can change form from one human to another) and this gets activated during death. He knows his Horcruxes will eventually run out and that’s why calls himself a mortal and tries not to die in the first place. He knows the Philosopher’s Stone cannot give him full protection against his really hazardous lifestyle.
Horcruxes can only be produced by killings. Doctor Who has directly or indirectly killed millions of life forms in the universe (even if they were mostly evil).

5. Uses Legilimens very often to go into the people’s minds to see their thoughts and memories and sometimes uses Obliviate to hide their memories. He has also learnt to cast spells without his wand.

6. Apart from being a Wizard, he is also a Seer and that helps him in all his adventures as he can predict what’s going to happen.

7. The Daleks are a Goblin-Elf genetic experimentation gone wrong. They are dark wizards who use the Avada Kedavra as a first resort during attacks.

8. England is at the centre of both the Doctor Who and Harry Potter Universes.

9. Like Dumbledore Doctor Who is secretly gay and hence can’t hang on to any of his female companions.

10. One candidate for the Doctor is Draco Malfoy. He may have tried to do a “Tom Oliver Riddle” becoming “Lord Voldemort” with “Draco Malfoy” but failed.
He then jumbled
Hogwarts’ Draco Malfoy
Into
Galafray’s Doctor Who.
He took all the wizards to another planet where they called themselves Time Lords and changed the spelling to call the planet Gallifrey to avoid anyone figuring out his name riddle. Then he proceeded to destroy all of them and finally became a good guy because he wanted secretly to be just like Harry Potter all along.

Similarly, headlines for every conceivable scenario…

Lack of dissent shows that Modi is a Fascist dictator.
With this high level of dissent, Modi should quit at once.

This big scam means Modi should quit politics.
This small scam is just the tip of the iceberg.
No scam shows that Modi has successfully suppressed all information coming out of government.

His obsession with kurta shows he’ll never get out of his local mind set.
Hypocrite Modi decides to wear a suit.

Modi speaks too much.
Modi speaks only when he wants to.
Modi doesn’t speak.

If he wins in 2019 yet again…
Authoritarian Modi fools India once again and emerges undisputed Fascist dictator of India.

How many people does it take to change a light bulb in Lalit Modi’s house?
Zero.
He won’t bother. He’ll just Tweet a 1000 statuses and think his job is done.

He has become one really sad “sack”.
‪#‎ArnabGate‬

Time to publish a really fat Encyclopaedia Lalitana with a list of all of Lalit Modi’s allegations, people implicated, leaked documents and mails.
‪#‎ArnabGate‬