I went to Windsor Manor (now ITC Windsor) after years.

Most of the autowallahs looked at me as if I was talking about a foreign country.

Old Airport Road? JP Nagar? They queried. I think only the 10th or 12th autowallah had heard of it.

When I came to Bangalore in 1988, there were only 3-4 5-stars including Windsor Manor which was a landmark and every autowallah knew it very well.

Windsor Manor was also the famous setting for Kamal Haasan’s Pushpaka Vimana film in 1987 (The Windsor Manor bridge scene with the dead beggar is iconic) and was once the hub of the high and mighty.

New Bangalore has slowly been crushing Old Bangalore out of existence and at least people like me have been denying it for years. 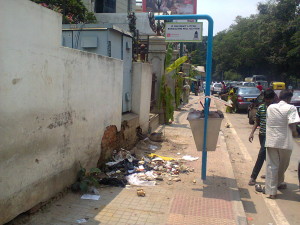 ∙ Bangalore is a city of the future.
The future as shown by WALL-E that is.

Set out to make an omelet.

Colour 110 saffron and the others in various other hues.

Poach another half-a-dozen eggs and try to paint them saffron too.

Scramble the rest and move on to other experiments

Some eggs will hate being boiled or fried and try to jump out of the pan.

Proceed to mix all of them to now make Egg Broth with a few dozen cooks supervising. 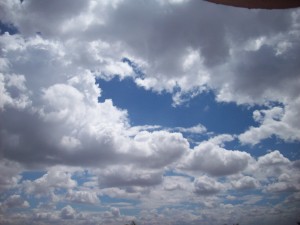 Bangalore Rain Facts:
The moment the temperature touches a vague tangible high, it rains.
Thanks to this, the highest ever temperature recorded in Bangalore is 38.9°C. The average temperature is just 17°C.
Bangalore is blessed with two monsoons: Northeast & Southwest. Then there are those regular thunderstorms totally unrelated to the monsoons.
Bangalore averages atleast 100mm of rainfall for as many as 10 months in a year (from March to December), pretty rare for any Indian city.

There is only one rule on the roads of India. Drive to the left. Even that is a custom more honoured in the breach than the observance. That is the very first thing one has to learn while driving on the roads of India. Most of the traffic laws seem unknown to most of the motorists. The throttle and pedals are mere playthings. There’s no need to slow down your car at sharp turnings. (The people around you will be forced to screech their brakes anyway) The sole purpose of roundabouts is to add to the beauty of the city and lanes merely mean more space. If there’s no cop watching, then you didn’t break the rule in the first place.

The rules are more of “opportunity” than “road sense”. For example, you don’t overtake from the right, but from wherever you get space. A motorist in front of you might suddenly show his hand, take a 90-degree turn and cross you without even looking. If you crash into him, it’s your fault. Didn’t he signal you? It’s all part of the game. Pavements are for pedestrians, but in case of emergencies, they have to step down for bikers. Right of way? That’s another term for “My way”.

Apart from this, there are other hazards like cattle sitting casually in the middle of the road, merry pedestrians crossing hand in hand through thick traffic and unpainted speed breakers materializing out of nowhere. Of course, bad roads, potholes, non-working traffic lights and bad urban planning are part of the background anyway.

But you have to hand it to Indian motorists. They are deft at using their brakes, avoiding accidents and executing turns that defy the laws of gravity. Perhaps this is the ideal testing ground for both terrains and drivers. After driving here, one has the confidence to drive anywhere in the world.

For me it was baptism by fire as one of the first cities I witnessed crazy roads was Jodhpur, where traffic rules were at their nadir. (At least in 1981) I hardly saw any cops and the rare one’s present would only interfere in a major foul-up. While cattle can be found everywhere, here groups of cows would totally block the roads. People would simply take a diversion. Either that or it was half an hour wasted trying to make them get up. Ah! People had so much time in those days! Then, if another vehicle banged into you, noticing it was bad manners. I may be wrong, but I actually don’t remember any official zebra crossings. Even getting a driving license was the easiest thing possible, not that anyone checked anyway.

From Jodhpur to Bangalore

When I came to Bangalore, I found that the only constant was that traffic was mad. Otherwise, it’s a totally different world. Bangalore has an eccentric traffic personality. The first thing that sets it apart is one-ways. They are just everywhere! They rule the city. I take one route to office and a totally different route on my way back. I have no other way. Sometimes you’ll be stuck in a maze of one-ways. Now all that would be fine if they didn’t keep shifting like sand dunes. Some last for months. Some last for years. One even changed the evening I returned from work!

The biggest example of this is Residency Road. In the midst of all the changes an unwanted flyover came leading to traffic jams of the worst kind. The problem was rectified by making this wide and long road in the centre of the city a one-way, but not before putting a red light bang in the middle of the flyover. I haven’t heard of such a similar phenomenon in the world. I read a report a few days back that said that cops are about to find a permanent solution for Residency Road traffic. Ha ha!

Another supposedly brilliant solution that backfired was solar-powered traffic lights. They’re great when the sun shining. But when it rains all day, they shut down by evening and there’s a jam. For those uninitiated to Bangalore, the rainy season starts roughly in April and lasts till November.

One foreigner was once telling me how crazy he found Bangalore traffic. Then he asked me out of the blue, “Isn’t cow slaughter frowned upon in India?” I said a tentative yes. Then he asked, “There are so many cows on the roads, so aren’t they bound to get hit every now and then?” I said probably yes, wondering where this was leading. “So,” he popped the question, “when I go to an Indian restaurant and have beef, am I actually eating a road kill?”

But compared to many cities, the Bangalore traffic cop is very strict and seems to be everywhere. He’ll keep stopping you and check for driving license, insurance, emission certificate… (There seems to be an official drive against that, but I doubt it will succeed) He’ll even keep his nose in front of your mouth to check for drunken driving in the night. The fine for not having a side mirror may exceed the price of the mirror itself. Even pillion riders should wear helmets, and that too of ISI make. There are traffic police signs and notices everywhere that say Obey Traffic Police (not Obey Traffic Rules).

One dude’s luna got slapped with multiple fines. He didn’t have any money so the police seized it. My friend found that the amount of the fines exceeded the resale value of the luna. So he decided to let them keep it. That explains the dozens of vehicles gathering dust at so many police stations. Another dude didn’t have a helmet and so he got down and started walking near a junction. The cop looked at him dragging his vehicle and still asked, “Where’s your helmet.” When he pulled a fast one and said he was taking it for repair from home, the cop checked the engine and found that it was hot. He got a fine for not wearing a helmet anyway.

My classmate jumped a red light on his humble bicycle and was chased by a cop. When the cop caught up with him, not only did he fine him for jumping the signal, but booked him for over speeding too! My father, a retired air force officer, has always been particular with his papers and following rules. But once a cop after checking all his everything scratched his head, looked around and cut a challan anyway. For what? He found the registration number a bit faded and couldn’t read it (Even though it was legible). Bang went 50 bucks and I learnt about one more traffic rule.