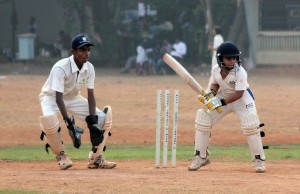 Come the World Cup and a cricket-crazy nation like India is bound to go berserk. Now, with the World Cup reaching its climax, life’s a hollow emptiness without the willow. Nero might have fiddled while Rome was burning, but no one is going to budge from the TV room while cricket is being played.

Newspapers and magazines write cricket. Companies and business establishments think cricket. The TV buffs see nothing but cricket. And what about the cricket nuts? They see cricket, think cricket, talk cricket, walk cricket, eat cricket, sleep cricket and dream cricket. In fact, they breathe cricket and live cricket. Parks and open spaces are filled with crowds and heated debates. If there is anything mightier than the bat, it is the ball. Restaurants resonate with the names of cricket stars and offices reverberate with endless figures, statistics, numbers, overs, runs and matches.

Azhar doesn’t know a thing about field placing. Ask the bloke at the grocery store, he knows all that there is to know. Gooch doesn’t know what’s in store for him; the chap behind the restaurant counter smugly knows all. Shastri can’t understand what’s going wrong with him. The pan-patti wala can comprehend that quite easily. “Scindia can’t even select a team of the Nineties; I could choose one for the 21st century!”

“All this — and much more;
at your local grocery store.”

One ice-cream shop in Fraser Town proudly offers a 5 per cent discount the day India wins a match. Another shop in the same locality gives a similar discount when any ‘fan’ wants to talk to a ‘star’ Down Under. One innovative service centre on Langford Road declares in the paper” “Watch the World Cup live in AC comfort while you buy our tyres or get your wheel balancing, wheel alignment and engine tune up,” and hence the newspapers seem to be filled with little else, with most dailies devoting one full page to the pyjama game. Letters to the Editor are numerous on the rights and wrongs committed on and off the field. “Ah! Azhar could learn a few things from me!” Everyone seems to think.

Can companies fall far behind? Kapil and Tendulkar prefer Boost while Manjrekar prefer Complan. From Complan boy and Complan girl to Complan star. Boy, you’ve come a long way. However, Kambli would settle for something new from Nestle. Power might be an old favourite and Action the official for the Indian squad in the World Cup, but Prabhakar clearly prefers Status from Lakhani.

Eveready changes its tune from ‘Give me red!’ to ‘Give them power’ ‘n ‘Charge ‘em up’, a scheme to courier messages to the Indian team Down Under with an autographed acknowledgement in return.
Another ad in the paper screams:
“Listen to Sunil Gavaskar’s views on India’s chances in the World Cup, call…”

The magazines too leave no stone unturned with the fullest tournament coverage and all sorts of ‘Guess who?’ contests. Bush is back yet again with its great catches, hooking everyone from Tom Alter to Kabir Bedi.

With the latest satellite TV witnessing a full boom, cricket maniacs shouted, fretted, fumed, and clamoured in the latter part of February to get their connections fitted on time, from the ‘friendly neighbourhood Star-man’, who instantly has become a superhero overnight. For in Star TV lies salvation from frustrating blanks like ‘Sorry for the interruption’ and ‘Break in satellite link is regretted’, hallmark of Doordarshan, India Ltd.

Come a win and jubilations and fairy lights all over, with merrymaking galore, but come a loss and gloom casts it pale shadow over the country. A newly married youth commits suicide in Surat “in total despair and frustration following India’s defeat.”

However, the cricket fanatics of this nation are always on the hunt for a scapegoat and Ravi J. Shastri, erstwhile ‘Champion of champions’ fits the bill perfectly. He is now ‘Slowcoach of slowcoaches’ and hence must go. Residents of Girgaum, Bombay, garland his cutout with chappal malas. The nation proves that it can raise any mortal to the pedestal of demi-God and bring him back down to earth with equal ease. Effigies of Shastri are burnt with the same zeal and enthusiasm and hatred as one would set ablaze dummies of political leaders.

Posters in Malleswaram advise Scindia to do away with Shastri. Four enterprising youths on two motorbikes ride through Bangalore with posters of ‘Shastri Down Down’ to make their point. Manmohan’s budget wouldn’t budge them. The Punjab polls won’t interest them. Bush’s pre-election jitters couldn’t shake them. Russia’s latest update can’t affect them. Shastri’s performance, however, is enough to give them sleepless nights and he must go.

Another cricket crazy nation appears to be South Africa, fresh after 20 years in the wilderness. Someone suggested that F.W. De Clerk hold his referendum on the day of the S. Africa-Australia tie as very few people would turn up to say no! One Cabinet Minister said at the beginning of a press conference, “Let’s keep this short, I want to get back to the commentary.” With the news of its victory over Australia, South Africa virtually came to a halt. Financial markets went on hold and radio stations broke into their normal programmes to announce the victory. Even the president himself was interrupted from a weekly Cabinet meeting, which he stopped and then sent a telegram, a congratulatory message to the team.

With the countdown to the World Cup final beginning, the question everyone must be asking is; “Is there life after cricket?”

(This article appeared in Deccan Herald newspaper on March 23, 1992)

I bet no country in this world has slipped back so badly in sports as ours.

In the Fifties, our football wizards entered the semi-finals of the Olympics and narrowly missed a medal. Today, we get thrashed by some Dutch team. Olympics or the World Cup, it is a distant dream.

Thanks to players like Dhyan Chand & Co., we won an amazing seven consecutive Olympic golds. Truly record breaking. World Cup, 1986, Indian and Pakistan battled for the 11th place in a 12-nation tournament. More than a half-century back, winning the Olympic gold medal was routine. Now, even if we “qualify” for Barcelona ’92, we’ll be ecstatic.

A trip down memory lane. Ramanathan Krishnan makes it to two consecutive Wimbledon semi-finals. Vijay Amritraj makes his presence in the tennis world, at his peak is ranked 13th in the world. Wimbledon 1991, rising star Leander Paes is out in the qualifying rounds. Quo Vadis, former national champion Zeeshan Ali? He can’t even qualify for the qualifying rounds! What an anti-climax.

On to the Asiads. In the inaugural games as well as in 1982, we got more than 10 gold medals. 1990? One lone Kabaddi gold medal. Our national anthem was heard just once. That gold was also due to the ignorance of the game of other countries, which turns out to be our bliss. Now even Kabaddi is out in future meets.

Whither cricket mania? In 1983, India won the World Cup. In 1984, India won the Benson & Hedges. In 1985, India won Sharjah. 1986? Miandad blasts a six and India is out. Clean bowled: If we don’t win with Pakistan this season, it’ll be ‘Six’ dismal years since we last won with them. That’s the effect of just one ball, a Javed Miandad-Chetan Sharma combine. Oh for those good old days.

These are not three fictitious characters, but cold hard facts of Indian sports today. All one can do is either hold one’s head in frustration or pray to God for India’s sports salvation.