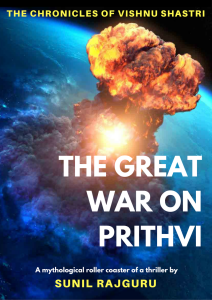 16-year-old Vishnu Shastri finds himself pulled into a parallel world called Prithvi, which is similar to Earth with a different timeline. There is no sign of religion or science there, but he discovers fantastic astras (or Mahabharat style missiles) that are virtual supernukes and can control the weather and all of Prithvi’s elements and unleash untold destruction.

Vishnu meets an ageless astomi called Guru, a mysterious astra expert, who throws up more questions than answers. He has to escape the beautiful, evil and demented Shakti, Prithvi’s foremost assassin who is out to get him. Then there’s Mahamaharaj Duryodhan, a megalomaniac king bent on taking over the world and forcing a destructive World War, the planet’s eighth, but potentially the most dangerous. But Vishnu is constantly nagged with the doubt of who pulled him from Earth in the first place and for what purpose? 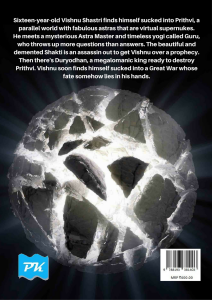 What if Earth had a quantum twin?
(The philosophy behind the book)
—India Today’s DailyO.in 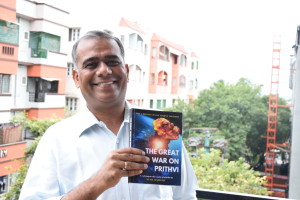 “Sunil Rajguru is a journalist based out of Bengaluru. This is his first published book, though he is in the process of writing many books on multiple genres. Rajguru has been a columnist for websites like Sify.com, IndiaFacts and DailyO.in. Rajguru is Executive Editor of PCQuest technology magazine and CIOL.com. He has worked for the Hindustan Times newspaper and website, CyberMedia’s Living Digital magazine, the Centre for Science & Environment and market research firm IDC India.”

Check out my handles…