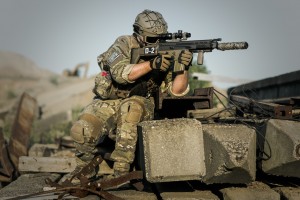 Quite a lot of gadgets we use today are all thanks to the R&D that took place in wars, both hot and cold

The armed forces have optimized a whole array of technologies that have led to more and more products coming into our daily lives at a fast pace. And even if there isn’t a war going on, war research is an ongoing process and continues to give technology an edge.

During WW2, when the British forces sent communication over a certain frequency, the Germans monitored and jammed that frequency. So the Allies turned to CDMA (Code Division Multiple Access) which can transmit simultaneously over a wide range of frequencies, making it virtually impossible for the Germans to do anything. Qualcomm made the chips and hence had the patent for the technology for decades before CDMA handsets came out in 1995.

The US military uses GPS to guide smart bombs and cruise missiles, enhance ‘locational awareness’ and improve their command of forces. And for that they spend around $400 million a year. An interesting offshoot is that the military allows others to use it for free and hence we have a host of GPS devices, location based tracking and the like. 1978 saw the launch of the first GPS satellite and today, we have dozens with ageing ones being replaced all the time. This was also as a result of extensive research and steps taken during the cold war with erstwhile Russia.

While the patent for a remote control was lying in the US patent office from 1893 and invented in 1932, it was only during World War 2 that a remote control was extensively used to set off the Wasserfall missile. Then in the fifties, the first wired TV remote control was made called (what else!) Lazy Bones. The wireless remote came soon after that and brought about a big cultural change, breeding a whole generation of couch potatoes with it.

Attack of the Luftwaffe–Jet planes

Before World War 2, planes were powered by a petrol tank and a propeller. Now there’s only so much you can do with such a plane. The speed and capacity reaches a dead-end after a point of time. The Germans changed the rules of the game by replacing those old engines altogether with jet engines. The West was already looking into the science of jet planes. So, after World War 2, jet technology went ahead full steam and that laid the foundation for the modern passenger plane.

A great leap forward in computing–ENIAC

Short for Electronic Numerical Integrator and Calculator, ENIAC was the first device that could solve wide-ranging computing problems and could be reprogrammed. It was used during WW2 and cost about half-a-million dollars. This monster weighed 27 tonnes and comprised 5 million hand-soldered joints, 70,000 resistors, 10,000 capacitors and 17,468 vacuum tubes, all in a huge room. Today the complete power of ENIAC can be put in single chip that you can place on your little finger!

The Germans got this right–Satellite TV

During World War 2, the Germans were working on V-2 rocket (V stands for Vergeltungswaffe or Vengeance). It is thanks to this research that rockets were developed that could launch satellites and put man on the moon. After the war, science fiction writer Arthur C Clarke stated that ‘higher a TV tower, more the transmission range and clarity’, hence a satellite should be used to relay TV signals. This dream was realized in 1962, when the first TV signal was relayed through satellite.

When the United States Air Force approached Bausch & Lomb in the thirties for sunglasses for their pilots for UV protection at high altitudes, the legendary Aviator sunglasses were born in 1936. It made the American pilots so cool that the Ray Ban brand was formed and the Aviator was sold to the public in 1937. It was reported that after Tom Cruise used the Aviator in Top Gun, sales increased by 40 percent that year. But for the record, the Wayfarer, released in 1953, is Ray Ban’s bestseller till date.

A supercomputer that fits in your palm, a lethal weapon the size of your hair and a factory in your home. These are just some of the promises that nanotechnology offers, maybe in this century itself. But first what is nanotechnology? The term comes from nanometer (nm), which is one millionth of a millimeter. A strand of hair from your head would be a super giant in that region. So nanotechnology deals in the nanometer scale, which usually is 0.1 to 100 nm.

That means all the products created with this technology will be smaller, more compact, more efficient, cheaper, use less resources… the list is almost endless.

The concept of nanotechnology first came in a talk given by physicist Richard Feynman in the famous 1959 “There’s Plenty of Room at the Bottom” talk. He then talked of manipulating atoms to create a powerful form of chemistry to create “massively parallel operations”.

But much of the promise of nanotechnology is in the distant future. Let’s talk of 2005 and see what products have already come out using this new technology.

These are by no means the first generation of “nano products”, products sized in the nano scale. These are merely nanotechnology-enhanced products. We are still years (maybe decades) away from making a cellphone for an ant, as the HP ad puts it.

A screen in your goggles

The Teleglass is a tiny 0.24-inch screen that you can fit on top of your goggles. These videoglasses use AMLCD (active matrix liquid crystal display) technology. You can connect the tiny screen to your mobile, digicam or portable DVD player and watch movies and videoclips. Clip it on one lens and you can leave the other clear, so you can walk or do you work normally while watching a film.

Nano air to warm your soles

Wouldn’t it be great to have warm insulating soles in your shoes when the going gets really cold? Most insulation requires a layer of air to warm you, which gets compressed if you step on it, rendering it ineffective. ToastyFeet from Polar Wrap uses “aerogel” which are nano-sized pockets of air, which work even if you step on them. And if you can always keep your feet warm, then it greatly reduces the chances of getting a cold. http://www.toastyfeet.com/, http://www.polarwrap.com/, http://www.aerogel.com/

The CyberMan GVD510-3D is a stereoscopic head-mounted display (HMD) that gives gamers a taste of virtual reality. It’s a tiny ultra-low power 640 x 480 VGA-resolution microdisplay. There are 921,600 color dots in a 0.44-inch-screen capable of 16.7 million colors. The makers claim that once you put it on, it’s as good as a 40-inch screen placed at a distance of 7 feet. http://www.oriscape.com.cn/

Golf balls were one of the first products to use nanotechnology. NanoDynamics has introduced the next generation of golf balls with NDMX technology that ensures a straighter flight for the golf ball. This hollow metal ball reduces the “hook” and “slice” of a golf ball and optimizes energy transfer from the golf club head to the ball. http://www.nanodynamics.com/

Nano-tex developed a spill-resistant fabric using nanotechnology. Arvind Mills and Arrow shirts are some of the beneficiaries of this technology. If you drop tea on a nano-tex pant, then the drops just roll off your fabric. Nano-tex has also come out with fabrics that repel and release stains, resist static and give cool comfort. http://www.nano-tex.com/

Merc gets a coat of nano

Mercedes Benz has gone in for nano-particle clearcoat paint that’s glossier and more scratch-resistant than regular paints. There is a layer of clear lacquer above the paint, which has extremely small ceramic particles that form a protective network all over. The paint came out after four years of research and is expected to have an increased life over other paints by many years.

In the eighties, IBM manipulated Xenon atoms for the first time to spell out their logo. Each letter is 5nm long.

Nanotechnology: Technology that deals in the nanometer scale, which usually is 0.1 to 100 nanometer. (Note one nanometer is one millionth of a millimeter)
Nanowire: A nanometer wire that will be very handy in making ultra-small circuits in ultra-small products.
Nanobotics: The science of designing and building nanorobots
Nanoknot: Nanoropes that can be tied
Nanolithography: Printing at the nano scale
Nanomotor: A molecular device that will be able to convert energy into movement

While a lot of people oppose nanotechnology citing that it could lead to the creation of incredibly small weapons easy to hide and use. Others have predicted the emergence of a “gray goo”, created by “self-replicating nanobots running amok”. How would you control millions of nano robots that can create billions of others. Then there’s “green goo” where a self-replicating nano machine would would consume all organic particles, creating a green non-living organic mass.

Carbon nanotubes, which are nothing but cylindrical carbon molecules, will form the building blocks of many nano products of the future. Right now they are being used to build newer and better screens, fuels cells for mobiles and the like.