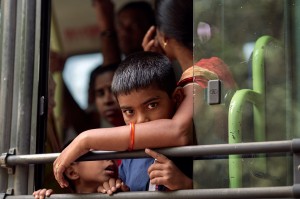 The students of the Bangalore University must be one of the toughest thanks to the BTS buses they travel in. With a population of more than half a crore and the prevalent birth rate, Bangalore is clearly inadequate in its Public Transport System. Forget a seat or place inside, in many a trip one doesn’t get a place on the footboard or even the ladder behind.

There is a civilized queue system in most cities, but this concept is unheard of at most bus stops in Bangalore. As soon as the bus is spotted, there is a mad scramble to get on, with everyone joining in the rushing, pushing and jostling. One is reminded of the game of rugby, where players act in a similar manner once the referee blows his whistle. One not only loses his breath on finally entering the bus, but also ends up losing a small article like a pen, hanky or some coins. Recently one poor chap lost one of his shoes, which fell off the bus and was mercilessly trampled by the cordon of vehicles behind. The number of people hanging for their dear lives makes the bus tilt at almost 45 degrees. This makes the onlooker wonder how these buses travel day after day, night after night, without overturning occasionally.

As if this isn’t bad enough, many of the trips due to some uncanny reason don’t even turn up and if they do, just whiz past your stop. This makes a tired and weary you, whose patience has already been tested to the limit, do nothing else but bang your head in frustration. To make matters worse, most conductors are far from polite, treating you like cattle and giving student bus-pass holders a ‘step-conductorly, treatment. Then the conductor is always ready with his war-cry ‘Munde hogi, Munde hogi’, as one is helplessly swung like a bar-pendulum in the suffocating atmosphere of the bus.

BTS has no further sense of time. A bus might come 15 minutes early or half an hour late. Further delays might be caused by frequent breakdowns or the whims of a driver. It may not sound true, but one bus-driver on his daily morning trip to Hessarghetta would stop the bus at a certain point, where he would meet a girl and they would chat sweet nothing for 5-10 minutes unaware of the rising frustration around them. If anyone chance objected, he would find himself speaking to a brick wall. Then one shouldn’t be surprised if one hears non-chalant remarks like: ‘No today, we are not going upto KR Market, only Majestic or ‘No, we are taking a different route today.’

Snap strikes are also nothing uncommon here. Half an hour strikes, one hour strikes, two hour strikes, morning strikes, afternoon strikes, Shivajinagar strikes, Majestic strikes, Subashnagar strikes…… The frustration of the average customer was evident in one ‘evening strike’ which occurred at Majestic last year. About 10 buses were burnt and a 100 damaged. It is to be noted that at the height of the Mandal Commission agitation, no student burnt a single bus in Bangalore, only some were painted with slogans. The problem with any strikes in this list of never ending strikes is that the cause is never genuine. In the above mentioned strike, a conductor had hit a member of the fairer sex. In another case, a drunken driver had created nuisance and was in the lock-up. This formed the pretext for a snap strike.

Even the condition of the buses is nothing to brag about, with seats not upto the mark and some of the roofs being so bad in the rainy season, at times one has to open an umbrella inside the bus! Also some of the buses have such loud screeching brakes, that you can hear them clearly if you happen to live near a bus-stop. This however works out to be an advantage as no two buses have the same screech. Say bus no. 271 has a high pitched sound and 272 a low one. If you’re late and haven’t heard the screech of your pitch, you haven’t missed the bus.

However, good buses or bad ones, happy journeys or sad ones, long waits or short waits, polite conductors or rude ones, small crowds or big crowds, sitting travel or footboard, walking to catch a bus or running, punctual trips or late ones, strikes or no strikes, all that is the lot of the common Bangalore student. One can be consoled by the fact that daily travel by BTS is nothing short of a mini-commando course and hence the student is fighting fit.

At the height of the ‘My heart Beats for India’ ad campaign of the Congress in 1989, someone rightly remarked:
‘My Heart BTS for Bangalore’.

India’s decision to boycott Sharjah 1992 is most welcome. In Sharjah, the true glorious spirit of the game is absent. The organizers are interested only in two things: a) Making money and b) Ensuring that Pakistan wins. India has no business to be the sacrificial lamb year after year.

Sharjah, in the end proves to be a morale shatterer for the Indians. In Sharjah 1991, an excellent all-round display by the Indians ensured that we won the first three matches, but thanks to some shocking umpiring, it al came to naught in the end. In the fourth match the Indians lost under questionable light while the final really took the cake. Aquib Javed got an outrageous hat trick of LBWs making him give the greatest ever bowling performance in the history of one-day cricket. All three decisions were given when the batsman had run half way through for making a run. In a game, where even one vital wicket can change the tide of the match, handing three on a silver platter is just too much.

Also, rather than stopping playing with Pakistan, India should stop playing in Pakistan. When the Pakistani players come here, they get VIP treatment, though the converse is not true. Some time back an Indian cricket captain’s shirt was torn and in the same season, the Indian hockey captain was chased by an angry mob. Is this how captains are treated? Also, in the same season, the Indian flag was burnt. The stadiums are filled with slogans of Kashmir and politics.