Every company and political party in the world buys out social media.
—Cool, let’s target Modi!

Every leader in the world, even Barack Obama, snoops.
—Cool, let’s target Modi!

Every defence deal in the world is corrupt.
—Cool, let’s target NDA!

Every party in India has seen a riot under its rule, especially Congress.
—Cool, let’s target RSS!

Every group in India can be bought over to commit violence.
—Cool, let’s change the script a bit but target Sri Ram Sena and attack BJP-RSS all the same.

If someone has started watching Indian TV in the last 10 days then he might conclude that it is Tarun Tejpal who is the main Prime Ministerial candidate.

At this rate Tehelka will become a prison magazine brought out single-handedly by Tarun Tejpal.

Sounds like…
Jayanthi Natarajan: Tarun Tejpal won’t get a fair trial in Goa.
Q: So where will he get it?
Jayanthi: Why, where else but the rape capital of India! 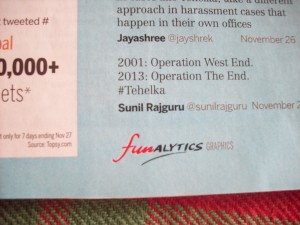 “Don’t kick a man when he’s down.”
#TarunTejpal
Predator + Rich + Powerful + Well-connected + Unrepentant + Still maligning the victim
= Howz that “down”?

What Tarun Tejpal seems to be saying…
I am so noble and honourable that I pleaded guilty for a crime that I didn’t commit for the sake of Feminism!

Step by step, Tarun Tejpal is behaving exactly like all the politicians and criminals that he has claimed to have exposed through Tehelka.
Shoma Chaudhury is a stellar assistant.

Even if there is a Tug of War between the Congress and BJP, then Tarun Tejpal is the rope and still may break.
#Tehelka

Police building up case.
Victim escalating her fight.
Tejpal marshalling his forces.
Going to be one fight.
Victim’s victory would be a watershed moment indeed.

I am JAG (Judge Advocate General).

I will choose the Judge.

I will choose the Advocate.

I am the General.

I will decide what crime it is.

I will decide the quantum of punishment,

I will choose victim’s testimony.

I will choose which State police to investigate me.

I will choose the investigating agency.

I am Judge Dredd!

When the Hunter becomes the Hunted.
When the Sting gets Stung.
When the magazine is News and not reporting it.
When the Tehelka is within and not around.

With the way she has behaved I think it is Shoma Chaudhury who should lacerate and take a 6 months recuse while Tarun Tejpal should be handed over to the police.

Q: Why did Tarun Tejpal demand his case be transferred to independent agency?
A: Because Goa is under BJP rule while Tejpal is under Congress rule.

The only good Tarun Tejpal has achieved is that he has increased the vocabulary of the entire middle class India by a count of 2.
#Lacerate #Recuse

Months back…
Shoma: Death penalty not a solution for rapists.
Today…
Tejpal: You are stellar Shoma, what foresight!

If Tehelka had been anti-Congress instead of being so virulently anti-BJP, it would have folded up within 24 hours of the scandal.

By now it’s crystal clear that Shoma Chaudhury doesn’t give a fig for women’s rights and rape but is just another power drunk editor.

2 years’ incarceration
versus
6 months laceration.
A recluse in solitary confinement
versus
A recuse as a judgment.

Nadeem-Shravan collected romantic tunes for years waiting for a Romantic Era to come and then flooded Bollywood.
The anti-Modi camp has been collecting stings for years now, waiting for the run up to 2014, and have started flooding the media with them now.

How they treat a rape accused…
If not for this, then Tejpal is the greatest journalist in the history of India and Tehelka the greatest magazine.

Every Character will meet his comeuppance within these 140 Characters.
#Twitter

Indian media coverage…
A scandal a day keeps the real issues away.