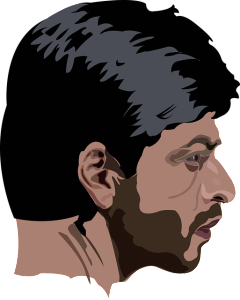 A for Amitabh Bachchan

One is the Shahenshah and one is the Badshaah. And of course, it’s impossible for them to get along. Or so the grapevine would have us believe. There’s a cold war that keeps brewing and we keep getting the details. One such was when Jaya Bachchan called Happy New Year a nonsensical film and that got SRK mad and Amitabh had to apologize.

A is also for Abhijeet who once declared that he wouldn’t sing for SRK ever again as he didn’t get enough respect to him. You could say that Abhijeet’s playback career got cut short after that. He only came back in the limelight when he became a strong supporter of Prime Minister Narendra Modi on Twitter.

B for Billu Barber

This one defied logic. If the hero of a movie is called Billu and is a barber, then what else can one call the movie? But barbers of the world (or rather India) found it derogatory and the film had to be renamed to Billu.

It was reported that due to a fracas between Aishwarya Rai and Salman Khan on the sets of the film, the former was sacked from the movie and replaced with Rani Mukerji. Years later SRK wasn’t invited to the marriage of Aishwarya at the Amitabh household.

This comes straight after I for Intolerance. SRK got into the whole #AwardWapsi controversy and Twitter started trending #BoycottDilwale. SRK pleaded T for Tolerance before the movie but the damage was done. People protested with banners and continued the campaign. One trade analyst said the film made losses to the tune of Rs 50-60 crores for distributors and hence could be called his biggest flop ever.

That set SRK back, but the flop of Fan hurt him even more. Thanks to all this, the release of Raees was pushed from Eid 2016 to Republic Day 2017. With Raees having Pakistani Mahira Khan, it could still release to a major controversy.

How SRK and Dilwale got punished for Aamir over intolerance

Why SRK’s Fan and Raees will suffer like Dilwale

Does Shah Rukh Khan want Bollywood to boycott him?

D is also for Deepa Sahi. Remember Maya Memsaab in 1993? That had generated a lot of controversy over the sexually explicit content. The censor board cut some scenes, which made their way to YouTube years later.

E for the Eyes of Amar Singh

When Farah decided to do her 3rd movie without SRK, all manner of reports came of a split between the two. The superstar later clarified that it was a date problem and nothing else. Since then SRK and Farah Khan have patched up and made Happy New Year. However then Jaya called the film nonsensical.

F is also for foetal test. A report appeared that SRK and Gauri went in for a foetal sex test during pregnancy and there was even a probe into those allegations!

The SRK-Saif Ali Khan gay act in Kal Ho Na Ho was a big hit and the acting continued well into award shows. That led some people to spread rumours that he was gay in the first place. To be fair, the duo sportingly carried on this theme while hosting a film award show.

When the King Khan hosts a film award, then it can’t be normal. At the Filmfare awards, he and Saif took potshots at everyone: critics, the film industry, themselves… Not everyone was amused though.

H is also for Pakistani terrorist Pakistani Hafiz who invited SRK to Pakistan after a controversial write-up in Outlook magazine. Declared SRK: I sometimes become the inadvertent object of political leaders who choose to make me a symbol of all that they think is wrong and unpatriotic about Muslims in India. I have been accused of bearing allegiance to our neighbouring nation rather than my own country.

After failing to get Mumbai, SRK landed with Kolkata in his kitty. Since then it was been trouble with Dada Sourav Ganguly, coach John Buchanan, irate fans, bottom of the table performances, Pak players controversy and initially they didn’t even reach the semis. G is also for (Sunil) Gavaskar. This is what the cricketing legend had to say about Buchanan: A failed former cricketer making a living telling international players to do what he couldn’t do. Needless to say SRK wasn’t amused. Since then KKR has won the IPL twice, though winning captain Gautam Gambhir soon found himself out of the national team.

In the 1990s, he once made certain remarks about “junk food actors” which allegedly referred to action stars Akshay Kumar and Sunil Shetty. The comments were subsequently totally denied and everything was fine between the three.

It is impossible for the Three Big Khans to get along. Bollywood is simply too small for Salman, Aamir and SRK. Either they are not on talking terms or are cold to each other at parties and meets. Aamir even once got into the mood and questioned SRK’s No. 1 status followed by the below-the-belt comment on his blog that a dog called Shah Rukh was licking his legs. The love-hate relationship between the three Khans continues. There was that famous SRK-Salman hug though.

Then there’s the Chalte Chalte controversy as mentioned above and there was also supposed to be another confrontation between the two at Katrina Kaif’s birthday party.

K is also for Kunder as it was alleged that SRK slapped Farah Khan’s husband Shirish Kunder at a Bollywood party. Kunder even Tweeted making fun of the fortunes of Ra.One saying, “I just heard a 150 cr firework fizzle”. Since then after a lot of apologies, SRK and Farah got together for Happy New Year.

Lux Cozi sponsored Kolkata Knight Riders. Lux Cozi promoter was charged with the abetment of suicide of Rizwanur Rahman. And the deal got promptly frozen, even though the ads kept coming on TV long after the press conference where the announcement was made.

M for My Name is Khan

One of the biggest controversies in recent times. The Shiv Sena. The MNS. The Maharashtra government. Everyone seemed to have got involved. The film got released amidst unprecedented security and SRK is still clueless on what exactly happened and why it happened. (The Thackerays said they were protesting SRK batting for Pakistani players in the IPL.) What the Shiv Sena did for MNIK, the MNS is hoping to do for Raees.

SRK was detained Newark Airport in the US for more than an hour “Because His Name Was Khan”. While SRK kicked up a racket, his detractors found the plot too eerily similar to the movie he was shooting for.

While this movie opened to bumper full house without any problems, thespian Manoj Kumar made a big fuss about how his character was portrayed negatively and wanted an apology plus the scenes being cut.

SRK has a great personal life and usually stays out of the news for the wrong reasons, but he was once linked to Piggy Chops and the Bollywood grapevine had a gala time. P for is also for parties. There’s something always happening at Bollywood parties.

Why did SRK take up Kaun Banega Crorepati? To prove a point to Amitabh? Was Kya Aap Paanchvi Pass Se Tez Hain a washout? Why did SRK host a college quiz?

No SRK movie has come in for so much flak over its story line and penchant for offending a whole host of communities. Panned by the critics, this movie raked in the moolah for SRK but still wasn’t the blockbuster it was made out to be.

An Open Letter to Shahrukh Khan regarding Ra.One

R for is also for Rab Ne Banadi Jodi. During the shooting of this movie, it is alleged that SRK smoked on the premises of a “No Smoking” Sikh college in Amritsar. SRK was also caught smoking in the Sawai Mansingh Stadium in Jaipur during an IPL match and a case was filed against him.

Heathrow airport proudly introduced body scanners that would tighten security. However people claimed to have saved and distributed images of SRK’s body, leading to an outcry by privacy groups.

This was one of the major box office debacles of the mid-nineties and director Mukul Anand and producer Subash Ghai traded barbs on who was responsible. Fingers were also pointed at the performances of Anil Kapoor and Jackie Shroff and this was one of the few controversies SRK quietly walked away from.

U for United Producers and Distributors Association Forum

Being a producer himself, SRK was thick in the middle of the 2009 Bollywood producers’ strike. Initially the TV channels just focused on rivals SRK and Aamir coming on one platform.

While stars and cricketers have got flak for endorsing any and every product they can get their hands on, SRK got maximum flak for selling a skin whitening cream—and that too for men!

7 reasons Indians are the most racist in the world

W is also for Wankhede Stadium. A grand fracas after a match (that KKR won!) led to SRK being banned from the stadium.

The badshaah of Bollywood extends his domain

A Xerox of Dilip Kumar. A copy of Amitabh. That’s how his acting was described when he started out his career. Then there was that hamming label. That way, he has come a long way with his performances in Swades, Chak De India and MNIK.

On his way to give a speech in Yale, SRK was again detained by airport security yet again in 2012. Then it was third time unlucky in Los Angeles in 2016.

Y for is also for Yash Chopra. While SRK and the Chopras have shared an excellent relationship, the very first movie Darr had Sunny Deol crying foul over the way his role was cut to size and the ending was shot and edited without him being taken into confidence. The media reported that they didn’t talk for years after that.

Z for Zaara, the Pakistani girl

When Veer-Zaara was released, Pakistan President General Pervez Musharraf was very upset with the negative portrayal of Pakistan. Luckily, that did not escalate into anything nasty.

(First version posted on February 24, 2010 and has been updated multiple times)

King Khan: A king for debut directors, too!

Neither Big B nor SRK: Can Incredible India think beyond film stars?