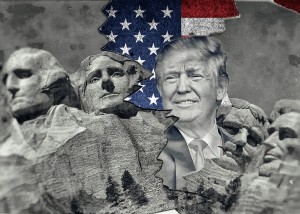 There is a concept called Rajyog, a period in which a king will reign and flourish, while all his enemies will perish. Those who ally with him will prosper and those oppose him will bite the dust. I had written about this in The spectacular international Rajyog of Narendra Modi.

Now one could say that the same has been happening to US President Donald J Trump. Trump has always been a bull in a china shop. First, Trump steamrolled real estate, then reality TV, then the Republican nomination process, then the US Presidential election, then America and finally the world. 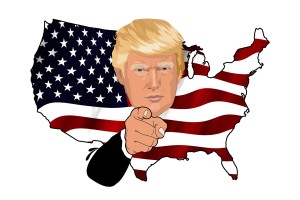 He just seems unstoppable. He’s put the first nail in the coffin of Obamacare. The “Climate Change” bogey has been kicked in its pants. Political correctness has been thrown out of the window. Jerusalem will be the official capital of Israel.

The economy is looking up along with the job prospects. He is giving a fillip to Make in America, the energy industry and he’s even trying to push manufacturing and the IT industry. He’s also the first President who’s really trying to drain the swamp.

In 2017 he has come out with one executive order after another and also pushed a fair bit of legislation and he is totally on the path to keep most of his election promises, a rarity for any politician.

As mentioned above, during a Rajyog, all your enemies perish and boy does Trump have many! A look at how all of them are faring…

The Democratic Party: When Barack Obama came to the US Presidency, it seemed that a Democratic dictatorship was upon America, but when he left, it seemed like we are headed for a Republican dictatorship. Obama was the worst President ever.

The Republican Party has never been this powerful since its inception in the middle of the nineteenth century. It now controls the White House, Senate, House of Representatives, Supreme Court and has most of the Governorships and State legislatures. That upward trend was cemented by Trump.

The extremely popular Bernie Sanders is still sidelined, lame duck Obama continues to overshadow everyone, Hillary Clinton refuses to go away as the rest of the Democratic Party is in total disarray. 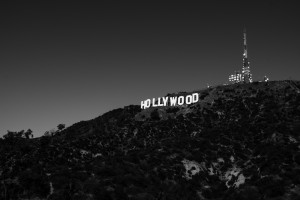 Phew! What a roll call (it tops 100, according to some lists) and what a fall for a bunch of people who have been shouting from the rooftops that Trump is a Hitler, a Nazi and an anti-woman monster!

Trump haters like Shia Lebouf have seen a total mental breakdown while the likes of Jennifer Lawrence are seeing their career go up in flames. Supreme moral guardian Meryl Streep looks like a royal fool blasting Trump 24X7 but doing business and hobnobbing with Hollywood molesters 24X7 at the same time.

Hollywood is also killing off golden gooses like the Star Wars franchise. Ticket sales are also at an all-time low and US 2017 sales have matched that of those sold in 1995 even though the population has increased and there has been an explosion of multiplexes. Outright box office disaster has been saved by much higher ticket prices, especially thanks to 3D, but for how long can they sustain it? One wonders how long can they go on without an extra creativity and the same ole sequels and reboots.

Mainstream media: The biggest attackers of Trump, they were all the virtual campaign arm of Hillary Clinton in the 2016 US Presidential race. Nobody told them that Hillary lost in 2016 as they continue to campaign for her even as 2018 is upon us.

The ratings of CNN have crashed. The AT&T deal with Time Warner (of which CNN is a part) has been blocked. The New York Times had to rent many floors of its office space to raise cash. Amazon’s Jeff Bezos owns Washington Post and is a CIA contractor.

Buzzfeed is under federal scrutiny for its role in the golden shower dossier. Trump hater Ariana Huffington couldn’t even hold on to her Huffington Post. A new wave of Alt Media has already beaten traditional media in terms of page views and YouTube views and one wonders how much longer the advertisers can keep them propped up. 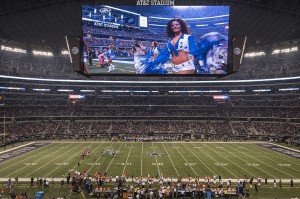 NFL: What has the National Football League got to do with Trump? Well it all started with Colin Kaepernick taking a knee during the national anthem before a game to protest against racism. That metamorphosed into a full-on battle between the NFL (mostly through its players, some officials and commentators) and Trump.

Predictably Kaepernick soon found himself out of a job, TV viewership went into decline, spectator attendance started falling in stadiums, sponsors started developing cold feet and revenues declined. There was even a viral video of a fan burning all his NFL merchandise.

Megyn Kelly/Fox: Megyn of Fox asked this question to Trump at the beginning of the Republican nomination process…

This was the beginning of an interrogation that should have ended Trump’s Presidency dreams right there. Trump would either have to deny it or apologize and both would have sunk him. However Trump raised his finger with a swagger and replied…

The crowd went wild. That was the beginning of his rise and that swagger took him straight to the White House. Megyn on the other hand went on a downward spiral being humiliated by conspiracy theorist Alex Jones and then Vladimir Putin. Her show ratings plummeted.

Fox News was lagging and then jumped on the Trump train and ended up on top of the ratings. Media mogul Rupert Murdoch was a Trump hater but changed tack. But the damage was done. Murdoch just announced the sale of Fox Entertainment to Disney. While he’s gained a lot of money, he’s just lost a lot of power. 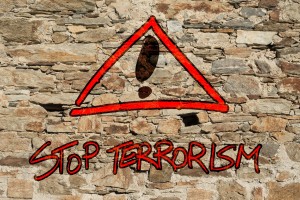 Islamic State: What became the Islamic State was gathering around for more than a decade and gained force in 2013. Islamic State attacked and had called for the assassination of Trump. Guess what? After Trump became President, they started waning and today control hardly any territory and have become just another declining mobile terrorist group like Al-Qaeda.

Iran: Israel is America’s best military and strategic and friend in West Asia while Saudi Arabia is the best Capitalistic-oil partner there. Obama tried to kick them both and embrace Iran, giving them tonnes of cash and letting them go nuclear.

But now Trump has put the squeeze back on Iran and embraced the above two. What’s more, Israel and Saudi Arabia have formed a sort of unofficial partnership. Jerusalem has been recognized as the official capital of Israel.

The Israel-Saudi duo is calling shots in the region and Iran has been left out in the cold. Iran is increasingly becoming powerless and could face military action against it in the long run.

Prince Al-Waleed bin Talal: This Saudi prince was one of the most powerful and richest men in the world, the biggest shareholder in Twitter. He also had stakes in Apple, AOL and Fox Broadcasting.

Then he Tweeted this to Trump…

.@realDonaldTrump
You are a disgrace not only to the GOP but to all America.
Withdraw from the U.S presidential race as you will never win.

Dopey Prince @Alwaleed_Talal wants to control our U.S. politicians with daddy’s money. Can’t do it when I get elected. #Trump2016

In 2017, Al-Waleed was arrested, lost a good part of his income and according to one report was hung upside down and beaten. Very few Obama-Hillary sympathizers and Trump haters are left in power in the Saudi government.

Hillary Clinton: She had Obama, the Democratic Party, Hollywood, Silicon Valley, the mainstream media, liberals, intelligentsia, academics… all eating out of her hands but now thanks to Trump she stands isolated and is a laughing stock. A lot of scandals related to Obama-Hillary are coming out of the closet and it remains to be seen whether Trump takes any action against them.

James Comey: Comey became the all-powerful FBI director in 2013 and was looking at completing his 10-year term and hired a Special Counsel to fix Trump. Well Trump shocked Comey by promptly firing him.

Theresa May: When the UK Prime Minister blasted Trump over some of his ReTweets over Islamic threats, Trump thundered back…

.@Theresa_May, don’t focus on me, focus on the destructive Radical Islamic Terrorism that is taking place within the United Kingdom. We are doing just fine!

Today May is hated by the people of England, her own party and her own people. Add the dangerous Trump to her list. Now trade wise UK may be squeezed by both the EU and America on both sides and really suffer. People keep attacking Trump and never learn. 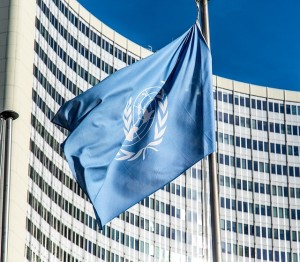 United Nations: All world leaders hate Trump and the UN symbolizes that perfectly. Well Trump is hitting back and has started rolling back aid to the UN over the Jerusalem issue and this is just the beginning of the decline of the UN.

Angela Merkel: Another Trump hater who was at her peak of power before Trump entered the Presidential race in 2015 and is becoming more and more irrelevant as Trump’s Presidency progresses. She is struggling to stay the Chancellor of Germany in a badly fractured coalition government.

The Republican leadership: Senior Republican leaders hated Trump, but they are being blown away. If you align yourself with Trump, you win, if you attack him you lose. This is a bitter lesson that the Republican Party is learning and is slowly moulding itself in the image of Trump.

Trump is also the biggest attacker of concepts like…

Communism: Many political parties. Mainstream media. Academia. Colleges. intelligentsia. Film makers and artists. They all leaned severely Left and were by and large left alone by Rightist leaders like George W Bush and backed to the hilt by Obama-Hillary. However Communism is being taken head on by Trump who is and out and out Capitalist.

Political Correctness: A pet obsession of the Left, it has already been thrown into the dustbin.

Social Justice Warriors: They’ve never had it so bad and are frothing in rage 24X7 after the advent of Trump.

Globalization: Was a one-way street before Trump happened. Now the global leaders who were pushing globalization unilaterally are facing a backlash and localization is coming back, albeit slowly.

Unfettered immigration: Seemed to be the future but now many countries are having second thoughts one by one.

Climate Change: Trump withdrew from the Paris accord and is backing the oil lobby to the hilt. This lobby was always suspect.

Kim Jong-un: Can the North Korean dictator get away after threatening America and Trump so much?

Silicon Valley: These Trump haters have so far escaped the wrath of Trump, but is an antitrust move coming against them?

Robert Mueller: Will the Special Counsel fix Trump or himself get fixed?

2017 was an amazing year for Trump and catastrophic for Trump haters.

10 ways how Trump will turn the globe totally upside down

Donald Trump’s US presidency was inevitable: 10 reasons why

One thought on “The spectacular Rajyog of Shahenshah Donald J Trump”