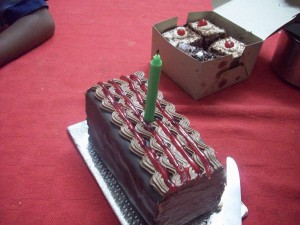 So let me jump on the table and dance on one leg with joy!

Because I am told by many people that for some obscure reason, this wonderful event happens only once in 823 years!

To burst the bubble right away, March 2013 also has 5 Fridays, 5 Saturdays and 5 Sundays!

Don’t believe me? Just click the time/calendar on the right hand bottom of your computer screen and check out March 2013.

Also, 5 Fri-Sat-Sundays would have hit you roughly that many times as many birthdays you have celebrated on this planet.

Every year has 7 months that have 3 days which come 5 times in that particular month.

The chance that those 3 days are Friday, Saturday and Sunday is exactly 1/7th of that, which works out to be once a year!

(If you pick 3 days randomly from 7 days a week, then there are many permutations and combinations.

Now this event may be skipped in some year and may happen twice in another since 364 days form 52 weeks and the extra 1-2 days shift the day-date matchings randomly.

A simple thumb rule to check on the calendar…

Any 31-day month on which Friday falls on the 29th will have 5 Fridays, 5 Saturdays and 5 Sundays.

Now the person who started this might argue that what he meant to say was that July being such a month will happen once in 823 years!

To answer that, in July 2016, the phenomenon will be repeated.

And you thought that you could say TGIF followed by a same-month weekend five times in a month only once every 823 years!

Call it a “5TGIF-Weekend Month” (5TWM or Fitwem) and it comes regularly 0, 1 or 2 times a year depending on the year.

Any Falsehood repeated 10 million times by a million people over thousands of networking and email service sites just has to be True!

This (Correct or Incorrect) Calculation by Sunil Rajguru

2 thoughts on “5 Fridays, 5 Saturdays & 5 Sundays in a month as common as your birthday!”