There is no doubt that Roger Federer is currently the greatest male tennis player of all time. You simply can’t argue with 17 Grand Slam titles.

But then Rafael Nadal has 14 titles and had it not been for his injuries, he could well have gone past Federer. More importantly, when it comes to the Nadal-Federer rivalry, Nadal lea 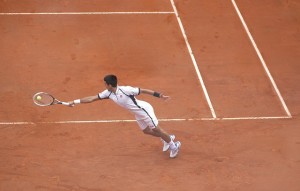 Then there’s World Number 1 Novak Djokovic. He currently holds all four singles Grand Slams simultaneously. The last time such a thing happened was way back in 1969, a feat achieved by Rod Laver. Imagine doing that after a whopping 47 years!

More importantly, head to head Djoko leads Fed 23–22. Djoko totally dominates Fed winning 6/8 of their last encounters including the Wimbledon and US Open 2015 finals. The ageless Fed can answer every question except the Djoko one.

Then with Rafa, Djoko leads 26–23 and he currently ruthlessly dominates winning 11/12 of their last encounters. So he is the present leader of the greatest trivalry of all time!

Djoko also became the first person in the history of tennis to bag $100 million in prize money with his French Open 2016 victory.

In the world of men’s singles Grand Slam tennis played in the Open Era (from 1968 onwards), Federer has the most Wimbledon (7) and US Open (5) titles ever. Nadal has the most French Opens (9). Djokovic has the most Australian Opens (6).

(While Nadal and Djokovic are outright leaders, Federer shares his records with Americans Pete Sampras and Jimmy Connors.)

Once Agassi said that if the “freak” Nadal hadn’t been there, then Federer would have won many more titles; but that applies to all three and not just Federer. Anyone without the other two would have steamrolled his opponents in the current era.

Federer burst into the scene by winning his first Grand Slam title at Wimbledon in 2004. From that tournament onwards, the three greats have won a whopping 43 of the 52 odd men’s Grand Slams played or about 80%. What’s more, from the French Open 2005 to Wimbledon 2014, at least one of them has featured in a Grand Slam final.

When it comes to the World Number 1 rankings, while Federer dominated in the initial stages of his career, in the last 3 odd years it has been by and large Djokovic.

Apart from the French Open, another thing Djokovic is behind is winning an Olympic Gold medal (both Federer and Nadal have it). He has a bronze and Rio 2016 may be his last chance.

All three are from Europe and ended the dominance of USA (think Sampras and Agassi) and together they have won in the region of 2300 matches for about 200 tournament titles.

From 2013–14 Djokovic had lost in three Grand Slam finals and had started doubting himself. But after getting the German great Boris Becker (who has 6 Grand Slam titles along with an Olympic Gold medal), his fortunes seem to have turned.

When Croatian Marin Čilić beat Japanese Kei Nishikori in the final of the US Open of 2014, a lot of commentators predicted a new era without the Big 3.

Čilić and Nishikori failed to do anything great after that. Even Andy Murray has been lacklustre. Nadal has simply nosedived and Fed has been stellar, but he has fumbled against Djoko.

2016 will be an interesting year for Djoko.

What if Djoko wins the Wimbledon and US Open this year? He would get a calendar Grand Slam too!

What if he wins his first Olympic Gold?

There is an outside chance that by the end of 2016, Djoko could be the greatest male tennis player of all time!

Who could have predicted that at the end of 2014!

One thought on “Djokovic and the world’s greatest trivalry”