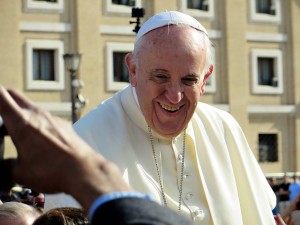 Pope Francis came with an air of differentness right from the very beginning of his papacy in 2013. Not only was he the first Pope to take the name of “Francis”, but he became the first Pope from the southern hemisphere and the first from the Americas.

This man (who was once a bouncer in a night club) broke the stranglehold of Europe which had sent a Pope for more than 1000 years. He is also the first Jesuit to become Pope. He is always in the news: Sometimes for the right reasons and sometimes for the wrong.

Here are 10 hits of Pope Francis…

1. Reaction to refugees: As Europe faces the biggest refugee crisis since World War 2, Pope Francis declared, “May every parish, every religious community, every monastery, every sanctuary of Europe, take in one family.”  He added that the Vatican do the same to two families in an effort to lead by example.

2. Humility: Francis became the first Pope the refuse the Papal apartments of more than 10 large rooms choosing to stay in a modest two-room guesthouse. He has shunned gold for the much cheaper silver and also decided not to wear the luxurious Papal mozzetta cape which are made of satin, fur or velvet.
He famously said: Oh how I would like a poor Church, and for the poor! His chief alms giver was also sent to Roman slums to help them.

3. Taking on the mafia: Italy is famous for its mafia and dons regularly take the blessings of the Vatican and make donations. Francis took them head on and said that they were “full of adoration of evil and contempt for the common good” and even went ahead and exo-communicated them.

4. Going global: 20 new cardinals were appointed by Pope Francis at the beginning of the New Year in 2015. Minority of them were from Europe (which has a stranglehold over the Catholic Church). Most of them were from other regions like Latin America (5), Asia Pacific (5) and Africa (3).

5. Other faiths: Francis has reached out to many other faiths and has also declared, “We also sense our closeness to all those men and women who, although not identifying themselves as followers of any religious tradition, are nonetheless searching for truth, goodness and beauty, the truth, goodness and beauty of God. They are our valued allies in the commitment to defending human dignity, in building a peaceful coexistence between peoples and in safeguarding and caring for creation.”

6. More accessible: Francis has proved to be the most accessible of Popes and there was the famous photograph of a small boy hugging his leg during a talk in 2013. Francis made no effort to send him away and continued speaking.

He has shunned limousines and uses the Popemobile (which is surrounded by bulletproof glass) sparingly going in for a simple Renault car. He even drove it himself at times around the Vatican. He allowed people to take selfies with him. In one case he agreed to wear a red nose for a newly married couple!

7. Financial irregularities: The Vatican has been hit by financial scandals. Pope Francis hired a former European fund manager to set right the system and head the Vatican bank. He announced that he would prune the establishment and hire professional managers.

8. Joint Congress address in US: He became the first Pope ever to address a joint Congress session in the US. He talked of climate change, capital punishment, immigration, pollution, inequality and poverty.

9. Sexual abuse rebuke: There have been too many sexual abuse cases within the Catholic Church. This had plagued the tenure of Pope Benedict XVI. Francis has announced a zero tolerance policy to this and termed it an ugly crime akin to performing a satanic mass.
When he took office, he gave a frank interview to an Italian newspaper and took his office by surprise. In that interview he is alleged to have admitted that one in 50 priests were paedophiles.

10. Gay rights: He may have opposed same sex marriages in the past, but on becoming Pope, Francis said the following which is the biggest support to have come out of the Papacy…

“If someone is gay, who searches for the Lord and has goodwill, who am I to judge? The Catechism of the Catholic Church explains this very well. It says they should not be marginalized because of this but that they must be integrated into society.”

1. Actual action against abuse: While he has talked tough on the issue of sexual abuse as mentioned above, no enough action has been taken against ridding the Vatican of this menace.

2. Actual action on gays: His open stance on homosexuality got dented when senior Vatican priest Krzysztof Charamsa was sacked after he revealed that he was gay. Charamsa accused the Church of being “insensitive, unfair and brutal” towards the gay and accused it of being “frequently violently homophobic”.

3. Women priests: A lot of people are hopeful of women becoming priests and then maybe one day we may have a woman Pope. But Pope Francis has proved to be conservative and not done much in this regard. He had ruled out women priests and has not said much about giving women a greater role in the Catholic Church. This even as other Churches in the world have women priests.

(He did welcome Church of Sweden’s woman priest Antje Jackelén though, a first by the Vatican)

4. Dalai Lama: Pope Francis once refused to meet the Tibetan Buddhist leader Dalai Lama thereby gladdening the Communist regime of China. This despite him talking warmly of other faiths as mentioned above.

5. Charlie Hebdo case: Here he found himself on the wrong side of the freedom of expression debate. He said that there was a limit to free speech when it came to faith and surprised everyone by remarking…

“If Dr Gasbarri, a great friend, says a swear word against my mother, then a punch awaits him!” (Note: Alberto Gasbarri organizes the Pope’s trips and was standing next to him at the time) That seems totally “un-pope-ular” advocating both violence and clamping down on free speech.

6. Big Bang is God’s Plan: Some time back he was lauded for believing in the Big Bang and Evolution, but he was lambasted for saying that it was part of God’s plan. Then there was the remark where he implied that good Catholics need not breed like rabbits.

7. Kidnapping case: His murkiest episode in his past is his being accused of being involved in the kidnapping of two priests by the Argentine Navy.