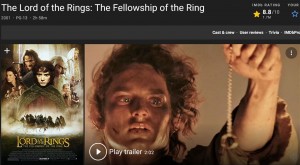 Up close with Hollywood bigwig Barrie Osborne, producer of the Lord of the Rings

In The Matrix, Neo lives in a com puter-generated world, jumps from building to building and indulges in gravity defying fights. In Lord of The Rings (LOTR), a breathtaking Middle Earth is created along with armies and a computer-generated character called Gollum. Both films had ground-breaking special effects and used technology in a spectacular fashion. And they were both produced by Barrie Osborne, who got an Oscar for the final LOTR: Return of the King.

For Osborne it’s been a long journey from China Syndrome in 1979, where trick photography and scale models were mostly used. So, how is Osborne in real life? Totally down-to-earth person and old-fashioned in a way. No flashy gadgets and no overt dependence on technology in the real world. In fact, he’s left the busy life of the US and decided to settle down in quiet and peaceful New Zealand where the LOTR trilogy was shot.

If you’ve seen That Thing You Do then you’ll remember Tom Hanks who always has a pocket notebook and pen in hand to plan everything. Osborne is more in that mould. He prefers to use a pocket notebook for taking notes and writing his schedule. Why not go in for a PDA to manage all that? To that he simply smiles and remarks, “Oh ya, I have an old HP PDA lying somewhere which I have to update”. The same thing is with other gadgets. “I have an IBM laptop and a Sony Ericsson mobile”. He also doesn’t feel the necessity to be with his laptop all the time. His trusted pocket notebook is enough for all his needs. And what about a home theatre? Well that’s when his eyes really light up. He’s got two home theater systems, which he’s passionate about. That’s a Panasonic 60″ plasma screen with a Sony DLP digital projector.

It goes without saying that movies remain his first passion. Face/Off, Dick Tracy and China Moon are some of the other movies he’s been associated with. He has over 30 years of experience, and he was vice president for Feature Production at Walt Disney Pictures and oversaw around 15 motion pictures. He created a record with LOTR, shooting 3 films in a row, in New Zealand.

Osborne was in India recently to promote animation and films here. He’s convinced that there will be a big shift in the Indian entertainment scene and wants to be where the action is. For one, he’s very keen to back Shekhar Kapur’s Pani, a futuristic movie based in India set in a time period where water will be a scarce element. Special effects will play a big role in that movie. Osborne is also keep on producing Paul Cohelo’s The Alchemist, with a fully “Made in India” tag.

What Osborne believes in strongly is that the Indian animation industry can produce movies in the league of LOTR. For that he’s tied up with Indian visual effects expert, Madhusudhan, who also contributed bits for LOTR 3. Together, they’ve set up an outsourcing studio in Chennai that will compete with the best in the world.

So will we soon see a Matrix out of India? Just watch this space.

(This article appeared in Living Digital magazine in July 2005)