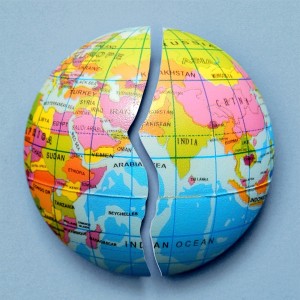 How can a person feel lonely or isolated in a world of around five and a half billion? It’s not difficult. Man follows the policy of ‘Divide and Live’ — he keeps on dividing the population into ever smaller groups, increasingly isolating himself. First, the world is divided into the living and non-living. The living into plants and animals. The animal world is further classified into vertrebrates and non-vertebrates. Vertebrates into mammals, amphibians, reptiles, birds and fishes. Then there are two clear distinctions in mammals — humans and non-humans.

Then mankind is spread over five different continents, which could well be five different worlds, separated by race, language and skin colour. The ‘white’ropeans, Americans and Australians, brown and yellow Africans and Asians. Continents are further divided into countries, each fiercely independent and engaged in a rivalry with each other. The Russian-American cold war of yore. Anglo-French antagonism which has seen the two countries in opposite sides in seven wars in the past. Indo-Pakistani clashes. The long Iran-Iraq conflict… The list is long. ‘Love they neighbour’ is a dream; most neighbouring countries have had atleast one major conflict, or are at a perpetual state of war.

As if this isn’t enough, many countries have secessionists who want separate lands. The former Yugoslavia has been torn apart by ethnic conflict, while Afghanistan’s internal turmoil in the 1980s saw much of its population either dying or fleeing the country. The Kurds are seeking a separate homeland in West Asia. Pakistan was split into two in 1971. And India has faced secessionist militancy in Punjab and Kashmir.

There is further division on the basis of religion. All religions talk of God and service to mankind, but history has witnessed the bloodiest of campaigns when armies of two different religions have met. The old world saw many battles between Christianity and Islam. There have been four Arab-Israel wars over religion. It was antagonism against a particular sect that caused Adolf Hitler to court disaster with his infamous ‘Final Solution’. India also has had its communal riots. Almost each religion has conflicting sects. The division chart continues. Hinduism has been divided by untouchability, Islam by the Shia and Sunni factions. In Christianity it is the Catholics versus the Protestants, with many other sects.

There are differences in political ideology. Socialists and capitals, blocs and pacts. The Left, the Right and the Centre. Factions and groups within a single party. There are divisions on the basis of money in one’s pocket — the upper class, the middle class and the lower classes. Two different classes can’t mingle, as oil and water don’t mix. In a country like India, there are states with different languages, cultures and traditions. There is no unity in diversity. Each state is hostile to outsiders, and sympathetic only to its ‘sons of the soil’, granting them special privileges. These sons are further classified into various communities. There are agitations to have existing states divided, and we have Jharkhand and Uttarakhand movements. There are wheels within wheels within wheels…

Finally, your neighbour must fall into one or another of the above categories and you still don’t get along with him. This leaves  you with your family. With the passage of time, brother fights brother and they part. So, in the end you’re left alone and the whole world is out to get you. Five and a half billion divided by five and a half billion equals one.

(This article appeared as an Edit Page Middle in The Times of India newspaper on May 22, 1995)