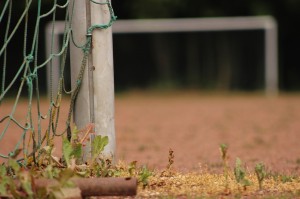 When I was small, I was battered with golden sayings, proverbs, adages and maxims of all sorts. They were there in our ‘Thought for the day’, school diary and liberally in our teachers’ speeches. All of them got registered on my mind as truths of life, but as the days progressed, they started to make less and less sense.

Take ‘Early to bed and early to rise makes a man healthy, wealthy and wise.’ I don’t know about the healthy and wise part, but I haven’t heard of a single wealthy man who doesn’t go to bed late. Another gem is, ‘Speech is sliver, but silence is golden.’ Saving a few situations here and there, I don’t see how far you can go with silence. You have to be a good talker to make your way around the world.

But I’ve faced the greatest problems with ‘Practice makes a man perfect’. There are certain people who have a natural talent for a thing and are near perfect with their first try. And there are others like me who for years persist and get nowhere.

For example, take football. I watched stars on TV do wonders with the ball and got attracted to the game. I started playing seriously at the age of seven. I played during the breaks, after school and in my spare time. After three years, I was still where I started. I joined a boarding school where we used to play football daily. Let alone master the ball, I never could even score a single goal in a single match.

Once in a match, 22 players were crowded near a goal. I got disgusted and came out. To my luck, the ball popped out of the melee and landed at my feet. I excitedly took the ball and started running towards the opposite goal. The whole crowd froze, staring at me in silence. After some time the opponent goalkeeper also took off.

I thought it would be simple, but the ball just wouldn’t stay at my feet. It moved far to the left, then to the right and then to the left again. I was zig-zagging desperately as the goalkeeper gained on me. I reached the goal after what seemed like ages. I fumbled and kicked the ball to open my account. But out of nowhere, the goalkeeper dived and it was a save. I passed out of school and remained goal-less after a decade of football.

It’s the same with my handwriting. I had the most atrocious handwriting in class. My teacher told me that the more I wrote, the better it would get. I patiently wore out practice books and even chose a greeting card with beautiful handwriting to imitate. I don’t know how many hours I spent in all that and was it worth it? Today, after all that practice I have a handwriting that looks like, as my sister puts it, ‘squiggly ants’.

When I became an adult, I was exposed to two things — shaving and driving. When I shaved for the first time, I ended up with blood and leftover hair on my face. A thousand shaves later, I am just marginally better.

Each time I ride my scooter, I say my prayers. When my father started to teach me to drive in school, he was a very frustrated man in a matter of weeks. Today, after being on the roads for 7 to 8 years and driving in a tough place like Jodhpur where nobody follows any rules, I am what I was.

And it’s the same with a dozen other things. 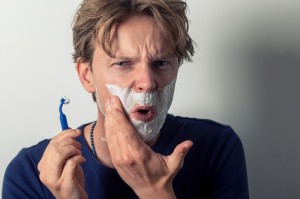 I hate shaving. Period. The very sight of a razor is enough to give me the creeps. I’d rather go to work unkempt than indulge myself in this daily ritual.

But it wasn’t always like that. When I was small, all things connected to shaving including ads on TV had a great fascination for me. I just loved watching my father put thick white creamy lather on his face and see the razor remove all the hair along with the foam like magic. I used to frown whenever I saw any uncle or bhaiya with a stubble.

So there I was looking in the mirror everyday and rubbing my cheeks hoping to see that elusive sprout of hair. One of my schoolmates, as eager as I was, used to shave his face with a dry razor even though he was as barren as the Thar desert.

Then one day, I finally saw it coming! I monitored my chin carefully every morning and patiently watched its progress like a farmer watching his first crops sprout. I soon got a good stubble and it was D-Day.

Armed with all the implements, I started. Phase I. Cool. Working up a lather and applying it on my face. Phase II. A disaster! I took the razor and removed the cream, I got a cut. Then another cut, then another… I washed my face and looked in the mirror horrified. All I could see was patches of blood alternating with patches of hair.

After a few more rounds of shaving I was still left with an unsmooth chin. “Don’t worry,” I was assured, “it happens to everyone the first time. You’ll soon get the hang of it.”

So I waited. In vain. Days passed. The days became months and the months years.

Everyone gave me suggestions. “Rinse your blade after every touch.” “Use warm water.” “Use the right angle.” Nothing changed it, I still looked like an injured warrior with a rough chin after shaving.

“I finally decided to get away from it all and grow a beard. And that’s when everyone started picking on me. My relative, a spinster, looked at me with disgust and said, “I simply can’t stand men who don’t shave.” One girl started calling me Devdas, while another remarked, “You look quite primitive,” relegating me to the status of a Stone Age man. A friend put his arm around my shoulder and exclaimed, “My, don’t you look depressed!”

This sentiment was echoed by others and I failed to understand the negative response my beard was getting. Even the college dean singled me out of all the people who didn’t shave. Bang in the middle of a lecture he gave me one of his cold icy stares and froze the class for 10 seconds before saying, “But why have you stopped shaving?”

The last straw came when one of my best friends refused to go out for a film with me and my beard because I looked to mean and resembled a beggar! I had had enough and decided to shave my grown beard. In my first try, it remained intact. With more than a dozen tries, it finally came off with a record number of cuts.

My friend engrossed in his paper looked up at my blood-stained face and said, “Now you look much better.” I was back to square one.

In a science fiction novel I read, the hero, thanks to a futuristic device, shaved just once a month. I wait daily for someone to come out with such an invention.