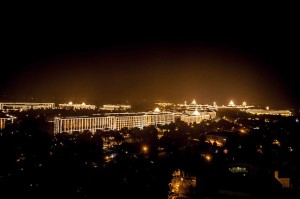 1. Bada hain to behetar hain: The King of Infrastructure

Compared to all other Indian cities, Delhi is a monster. Wide roads, fancy flyovers, huge parks, monuments, concrete jungles, multiplexes, universities, a forest ridge in the centre of the city… The list is endless. It’s a happening city full of festivals, plays, Pragati Maidan trade fairs and events. One never gets bored. The concept of NCR made it bigger and meaner. There’s the Metro to stitch everything up and cycle rickshaws if you want to cover shorter distances within a locality.
Trivia: Thanks to the 2010 Commonwealth Games, there will be underground roads, IGI Airport Terminal 3, power production upgrades, a Games Village next to the Yamuna and other expansions. Delhi received its first fast forward in the 1982 Asian Games. This is FF 2.0.

Zero degrees? I’m loving it! I used to really look forwards to Delhi winters. The city looks beautiful and calm. You don’t have to worry about power cuts. Unlike the summers, you can actually counter it by blocking all the cracks in your home and covering yourself in sweaters, mufflers and jackets. There’s greater variety of vegetables and fruits while everything tastes better in the winters. A hot water bath is absolute bliss! But the best feeling is sleeping under two rajais and feeling as warm as toast. In summers, even stripping down to your birthday suit won’t help matters.
Trivia: Delhi has mainly the Himalayas to thank for its cold waves.

3. History history everywhere in every step you walk

Everyone has heard of the seven cities of Delhi. But do you know you visit them regularly? When you visit the Qutub Minar, you’re in old City No. 2 (Lal Kot). Siri Fort? City No. 3! You pass by Tughlaqabad? That’s City No. 4. Adilabad Fort: City No. 5. No. 6: Feroz Shah Kotla. Shahjahanabad could be called the 8th city, which encompasses Chandni Chowk and Lal Qila. The number of monuments like the astronomical Jantar Mantar, memorial Raj Ghat and India Gate are also huge. Old Delhi transports you to an old world charm whenever you visit it. Lutyen’s Delhi, which could be called the 9th city, offers a great contrast.
Trivia: Delhi in some form or the other has been around for more than 2500 years.

4. Markets markets everywhere and every type of shop

While malls are homogenizing most Indian cities, Delhi has a variety of markets, each with a distinct feel. There’s the upscale Khan Market and the down to earth Karol Bagh. Sarojini Nagar, Lajpat Nagar and Chandni Chowk markets have their own charms. Who can ignore the gigantic and unique circular Connaught Place with its very own claustrophobic underground Palika Bazar. But best of all is the Daryaganj Sunday book market. If you want to know what it feels like to swim in an ocean of books, then this is the place.
Trivia: For malls, one just has to go next door to Gurgaon, which boasts of 30-40 of them. Ambi Mall claims to be the largest one in India and Mall of India promises to better even that.

The dhabas and thelas of Delhi offer such variety and taste. Even the chai tastes better off a thela. Eating low cost is a highly tasty proposition. Despite all the multinationals, Nirula’s is still around and kicking and rocking, offering almost everything under the sun. HCF anyone?
Trivia: Nirula’s began as HotelIndia in Connaught Place in 1934.

b. Snacks ho to aise: Aloo Tikki and Sheekh Kabab

I could live on eating these every day. Have the aloo tikki just like that, in a chat or in a burger. The sheikh kabab too can be had plain or in a roll. Try eating these delicacies in any other city and you’ll get serious withdrawal symptoms.
Trivia: It is said that Turkic soldiers first grilled meat over fires with their swords, the first kababs.

1. Summers that sap you of the will to live (Isn’t Hell full of blazing hot fires?)

You can counter the winters, but there is no solution to the summers. Simply no solution! It is terrible. Outside it’s hot, sweltering, sweaty, dusty and uncomfortable. At nights you have to shut the windows because of the hot air. Then there are the power cuts. You want to have so much lassi, juices, water outside, that you are sure to catch some sort of infection and that’s why summer also brings with it its sets of diseases. I also think tempers are greater in this season.
Trivia: The wind system of India brings the hot waves from Rajasthan during the summers. This is called the Loo.

2. An acute case of VVIPitis and it’s very contagious (My reach is longer than yours)

Everyone in Delhi is either a big shot, related to a big shot, thinks he’s a big shot, pretends to be a big shot or is sure that he’ll be a big shot one day. Flexing muscles, showing off, trying to put the other person down are all big put-offs.
Trivia: Delhi and Mumbai have roughly half the country’s crorepatis with Delhi the clear leader.

Oh God! How I used to hate Decembers and Januaries because of the fog! Flights get delayed and cancelled indefinitely. There’s a self-imposed curfew in the night. At night shifts in the Hindustan Times, I used to be the laughing stock because I used to wear a sweater, jacket, overcoat, muffler, warm hat… The reason was that I used to hang out of the car and act as navigator to the driver in the freezing cold. That would get me home in 2.5 hours instead of the usual 3.5 (in time to watch the sunrise, if there was one).
Trivia: If the visibility is upto 2kms, it is called mist and if the visibility is less than 1kms, it is called fog.

4. The city of (not so) magnificent distances (Bada hain to behetar nahin hain!)

Why is everything in Delhi so far away! If your office is one side of town and home the other, then half of your time is spent on the roads. Then there’s the maniacal drivers and road rage. If your friend circle is spread equally around the city, then you can kiss goodbye to your social life.
Trivia: Delhi is approximately both 50kms long and wide the and area is close to 1500 square kms.

That’s the very first thing that struck me when I started living in Delhi. Why is everyone ready to pick up a fight with you at all times? Whether it’s the autowallah, the bus conductors-drivers or the stranger you bump into a crowded market place? The same goes for your neighbours and colleagues. Is there something in the water that keeps everyone of the edge?
Trivia: Aristotle once said, “The inhabitants of extreme climate conditions are deficient in thought and technical skills …” Well in a way that’s true, no one stops and thinks… they just fight or argue. Aristotle also felt that those who have to cope with extreme cold are excessively aggressive.

b. Chauvinism of every kind (You name it, the city has it)

Delhi strikes me as a very male city. There is an underlying current of male chauvinism everywhere. In no city have I seen women so stared at or teased so openly or a visible hostility in the workplace towards women. Then there’s regional chauvinism too. You keep hearing the absolutely ridiculous “Oye Madrasi” and “Oye Bihari”.
Trivia: While India’s sex ratio is 944 females per 1000 males, Delhi’s is a lowly 821. That explains a lot of things. The crime rate against women is also double the national average.

2 thoughts on “5 Things I love about Delhi…”